If you’re new to paganism, there’s a lot to learn. We’re not a mainstream religion, so unless you had an existing interest in history or mythology, most of what you’re learning about will seem very unfamiliar – even our holy days and festivals!

Paganism covers a lot of different paths and practices, and so there are countless days that may hold special meaning to one pagan but not another. In general, most pagans will have at least a passing familiarity with the Wheel of the Year or would celebrate some equivalent festivals.

Why is that? Because at its core, paganism is a nature-based belief system. We recognise that humans are only one part of a larger whole and we generally aim to connect to nature and the passing of the seasons. The Wheel of the Year is really just a series of special days to mark the seasonal cycle and celebrating or honouring them helps us to attune to this cycle.

The most common version of the Wheel of the Year uses the Celtic days and to keep things simple, I’ll refer to these. If you have a strong connection to another pantheon, don’t worry! Almost every culture in history had some equivalent festivals and you’ll find a Greek autumn equinox, a Roman summer solstice and an Aztec Festival of the Dead celebration of some sort! Whatever pantheon or culture you’re most connected to, you’re likely to see echoes of this same idea flowing through.

When we talk about the Wheel of the Year, it’s because that’s the easiest way to picture it. Think of a big wagon wheel, with eight spokes an even distance apart. The Wheel is the solar year and those eight spokes are the eight special days that make up the Year. 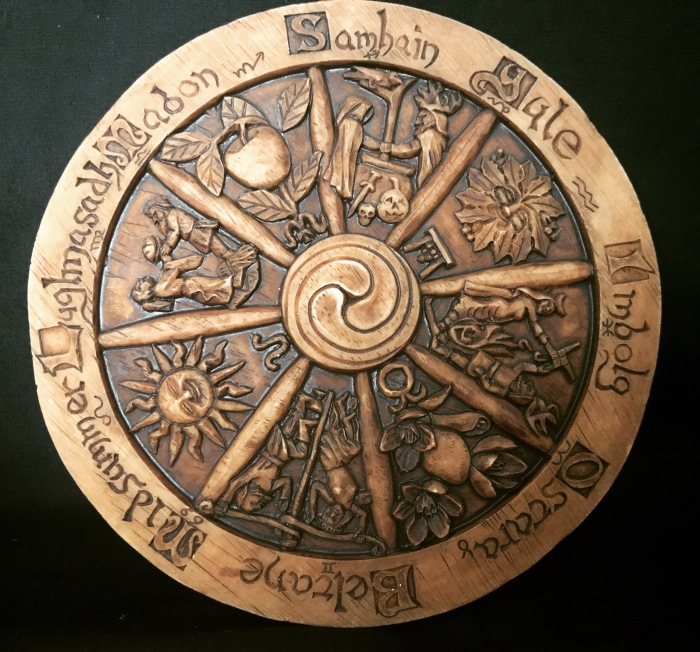 First there are the quarter days – the equinoxes and solstices that mark the sun’s transition within a solar year. Evenly placed between each of these is what we call the cross-quarter days or the fire festivals. Together, these eight sacred days tell our creation myth: the story of birth, death and rebirth, as it plays out on the stage of the gods and nature itself.

This is the Festival of the Dead, commonly marking the new year. Samhain is a time when the walls between this world and Otherworld grow thin and crossing over is easier (from both directions). A customary practice is to honour and connect with the spirits of the beloved or honoured dead, offering them food and sustenance. Many pagans will create ancestor altars. The old tradition of carved pumpkins or turnips is used to frighten off unwanted spirits. Because of the thinning walls between worlds, Samhain can also be a powerful time to practice divination.

Yule is the Midwinter Solstice, the longest night and shortest day of the year. It marks the turning point in the Sun’s journey. From this point on, the days begin to get longer and the Sun’s strength returns.

The pagan myth cycle links the Winter Solstice to the birth of the Sun God. From this night, His strength grows and the hours of sunlight each day begin to increase, bringing warmth and light back to the world. At Yule, it’s a common practice to bring greenery inside as a reminder that even in the depths of winter, light and life will return. Many pagans celebrate the Solstice with a fire to honour the God’s light.

As the days grow longer, life and light begin to return to the land. Imbolc is also known as Candlemas, the Festival of Lights. The word Imbolc comes from an old term meaning ewe’s milk, because it is at this time of year that lambs are born. Wherever we look, we see the first sign of life returning to the earth and this is a reflection of the Maiden Goddess returning. Imbolc is the Maiden’s return, typically linked strongly to Brigid the Celtic sovereign goddess of the land. It is a time of cleansing and renewal, preparing for the coming spring.

The Spring Equinox is a moment of balance. Night and day are equal at the equinoxes, and at Ostara we stand at the balance point where the light half of the year is growing stronger. This means the energy is focussed on life, fertility, and renewal. This is the “bees and bunnies” festival, when the earth is quite literally buzzing with new life. For many animals, this is the season when they find mates and bring forth the next generation. Trees put forth flowers in their own form of procreation, and the bees and other pollinators flit about to help make that happen.

It is the time of the “Spring fling” with fertility magic and the magic of regeneration being quite potent. There’s a lot mentioned about egg magic at Ostara, because in so many ways, eggs are the perfect symbol for this time of renewal.

Beltane is the opposite of Samhain; the other side of the Wheel when the walls between worlds thin once more but this is a time of light and life. As a result, Beltane has a connection to the fae and nature spirits. It is a time of fertility, as the land quickens towards summer heat.

The fertile time of Ostara pays off now, and this is the actualisation of that magic.

Litha or Midsummer is the Summer Solstice, and marks the longest day and shortest night of the year. In our myth cycle, this is reflected by the weakening of the Sun God. Many traditions have a history of two kings, the Oak and Holly King, with one taking dominance over the Light half of the year and the other over the Dark half of the year. As Midsummer marks the beginning of the Dark half of the year, it is reflected in the wounding and dying of the Sun God. Light begins to wane. The days grow shorter, even though we are still in the middle of the long, hot growing season of summer. Each day brings us inevitably closer to Winter.

This is the first harvest festival, marking the decline of the light. The fruit of the Beltane marriage of the Goddess and God is ripening and ready for harvesting. As the grain is harvested and made into bread for feasting on, so is a portion of it stored away as seeds. Within the harvest of the current crop, we find the potential for the future. The approach of Winter is implacable, and Lughnasadh is often a time of feasting on these first fruits, to celebrate and enjoy the bounty of the harvest.

Mabon is the autumn equinox and the second harvest festival. Standing directly opposite Ostara, it is another balance point where light and dark are equal to one another. Mabon, however, hovers on the tipping point into the Dark half of the year. One common myth cycle associated with this festival is that of Persephone’s Descent into the Underworld, provoking her mother Demeter into a time of mourning that sees the earth become cold and barren.

There are as many ways to celebrate these festivals as there are people celebrating them! It can be a deeply personal experience to explore how certain aspects of the natural cycle apply to your life and world, and this will change every year. I’ve been celebrating the sabbats for over two decades and each year I learn and experience something new about a given festival.

Because of the seasonality of these festivals, the issue of hemispheres inevitably rears its head. Western culture has inherited some common festivals and attached them to specific dates rather than seasons, so we have Easter (Ostara – spring and rebirth) in March/April, Halloween (Samhain – harvest season) in October, and Christmas (Yule – midwinter) in December. When we remember that Ostara is celebrating the spring equinox, it makes no sense to recognise this in autumn in the Southern Hemisphere. The same goes for celebrating Midwinter in the middle of summer.

There’s plenty of discussion and debate around whether Southern Hemisphere pagans should mark their calendar by the seasonal associations or by the northern hemisphere dates. It’s a decision everyone makes for themselves, but personally I find it makes far more sense to be celebrating Yule in the depths of winter and Mabon at the autumn equinox.

There are many parallels between cultures and pantheons, with very similar festivals and celebrations coming down to us through world history. As we look at each sabbat separately, we’ll investigate these further.

Published by Temple of All Gods

A Pagan Temple in Brisbane, Australia. View all posts by Temple of All Gods