Yesterday we held our first pop-up Temple at the Red Tent Open Day. It was the most wonderful and amazing experience, and somehow both exactly what we had hoped for and also incredibly unexpected!

Let me tell how this all came about. You see, we had a very hectic November and December planned with Temple Gatherings, workshops and our Midsummer picnic (not to mention our own lives outside of Temple), so we thought we would wait for next year before pushing forward with the pop-up Temple plan. But then we spotted the Red Tent event and in the space of about ten minutes we agreed we needed to do it.

We had exactly one week to get ourselves ready. One week to build a Temple, one week to figure out all the practicalities of how this was going to work, one week to sort out altars and deities and offerings and all the associated logistics of getting everything where it needed to be. You’d expect it would be chaos.

Somehow, on reflection, it wasn’t. It was easy. It all happened like it was waiting for us to reach this point. Dan managed to source a hexagon shaped (literally pop-up) tent for us to use. The hexagon is very important to us, it’s the shape of the Temple symbol for a reason. We scoured our own resources and only had to acquire a few things in addition. (Although I may have gone overboard on the offering flowers but what can I say? When you follow a Goddess of Love, there’s usually a lot of flowers involved…)

Exterior view of our Pop-Up Temple

A pop-up Temple has limited space so we could only host a few deity types. We spent a fair bit of time early on in the week considering which altars we should bring to this Temple.

Because Red Tent is such a woman-focussed initiative, we wanted to tap into that energy by holding space for the Great Mother Goddess. We made Her our primary altar, anchoring and supporting everything we did. But we are very conscious that we are not a Goddess Temple. Our work and our dream is about holding space for all the old gods, and at the end of the day it doesn’t matter if the participants are mostly men or mostly women. Every person, regardless of gender identity, can find deep and meaningful value in connecting with the energies of both Goddesses and Gods. So we were very much about holding space for our Sun Gods and our Horned One/Stag Lord. We also chose the Love Goddesses and Moon Goddesses, because they offer such a range of energy across the spectrum of the Divine Feminine.

All that long week of preparation, the Temple was stirring in both of us. I would wake each morning with that energy spiralling around inside me like a typhoon in a cauldron.

What surprised us the most about the entire day was how easily the Temple energy came once we set up the space. It was waiting just the other side of the Veil, impatient and wild to be born, and as soon as we had walls and a floor it was just there.

Calling the gods to our altars was an invitation and they came like wildfire racing into the space we had built for them. The Mother was our anchor and our floor, sunlight and moonlight interwoven to create our roof, with walls of horns and roses. Our Temple was born, it was present in the world and it was eager. 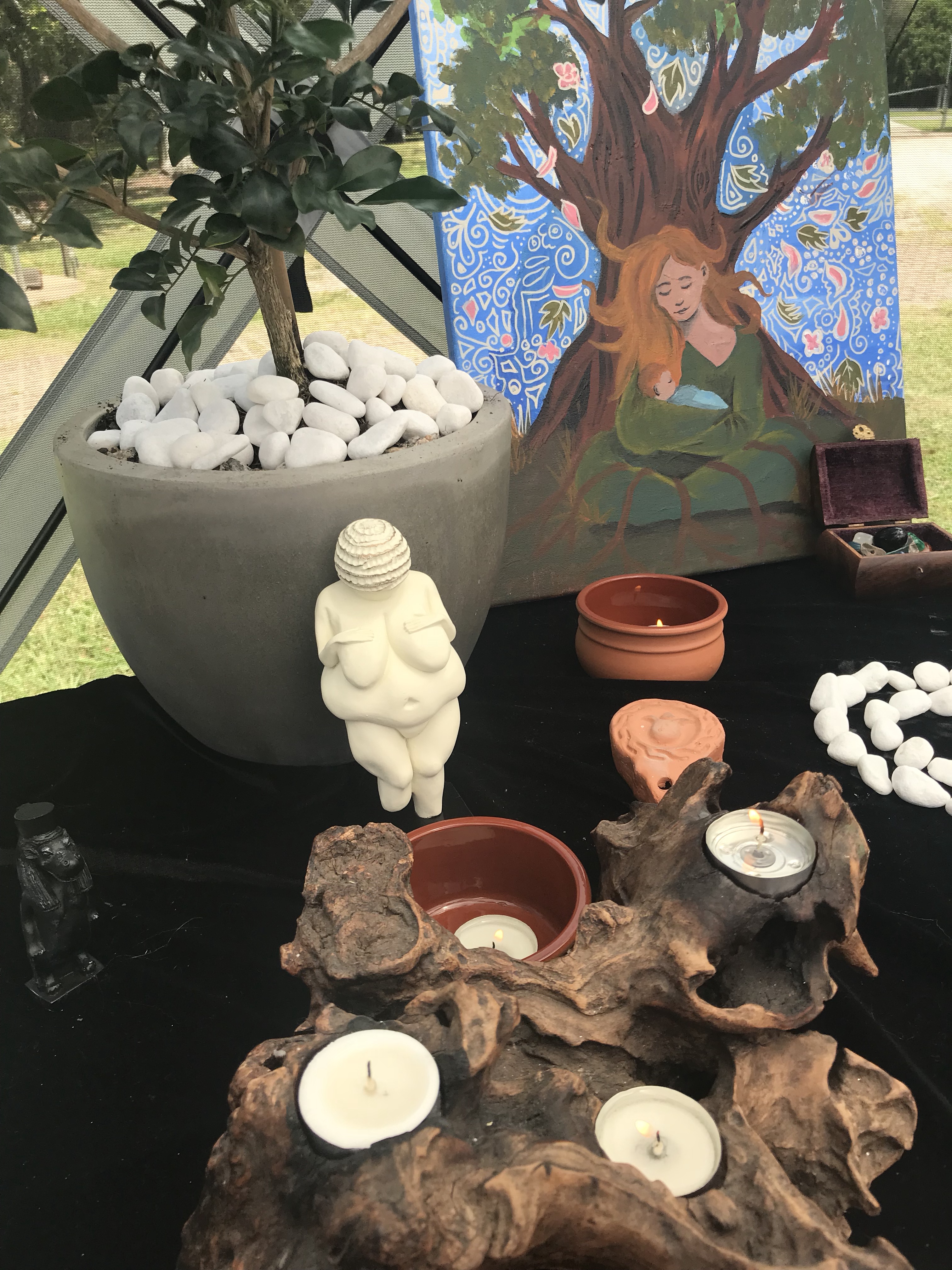 But our audience wasn’t a specifically Pagan audience. How would they react to us? Would they be at all interested in the space we had created for them? We genuinely had no idea how the day would progress or what the reaction might be!

We were absolutely delighted by how people were drawn to the space. One lovely lady walked in, exhaled in relief and said “this feels like such a safe space.” That was when I understood that the Temple is for everyone, regardless of whether they practice a pagan path or if they’re a stranger on the street walking by. We wanted to build a space for people to connect to our gods and absorb their energy, take it back out into the world with them, and we did so!

One of my favourite memories of the Glastonbury Goddess Temple was when a mother and child came in while I was there. They sat down at the altar, so serene and calm, and the mother helped the child write a “wish” to put on the altar. I loved the way this young person responded to the energy and was so involved in the process.

So for me, my absolute favourite part of the day was when we had our youngest visitors stop by to make offerings. Inside the Temple, these little people were gentle, careful and considerate in how they moved and what they did. We helped them to light candles on the altars, to write messages for the Mother Tree, to light incense on their favourite altar. They were so involved and so intent in what they were doing – it was absolutely wonderful! 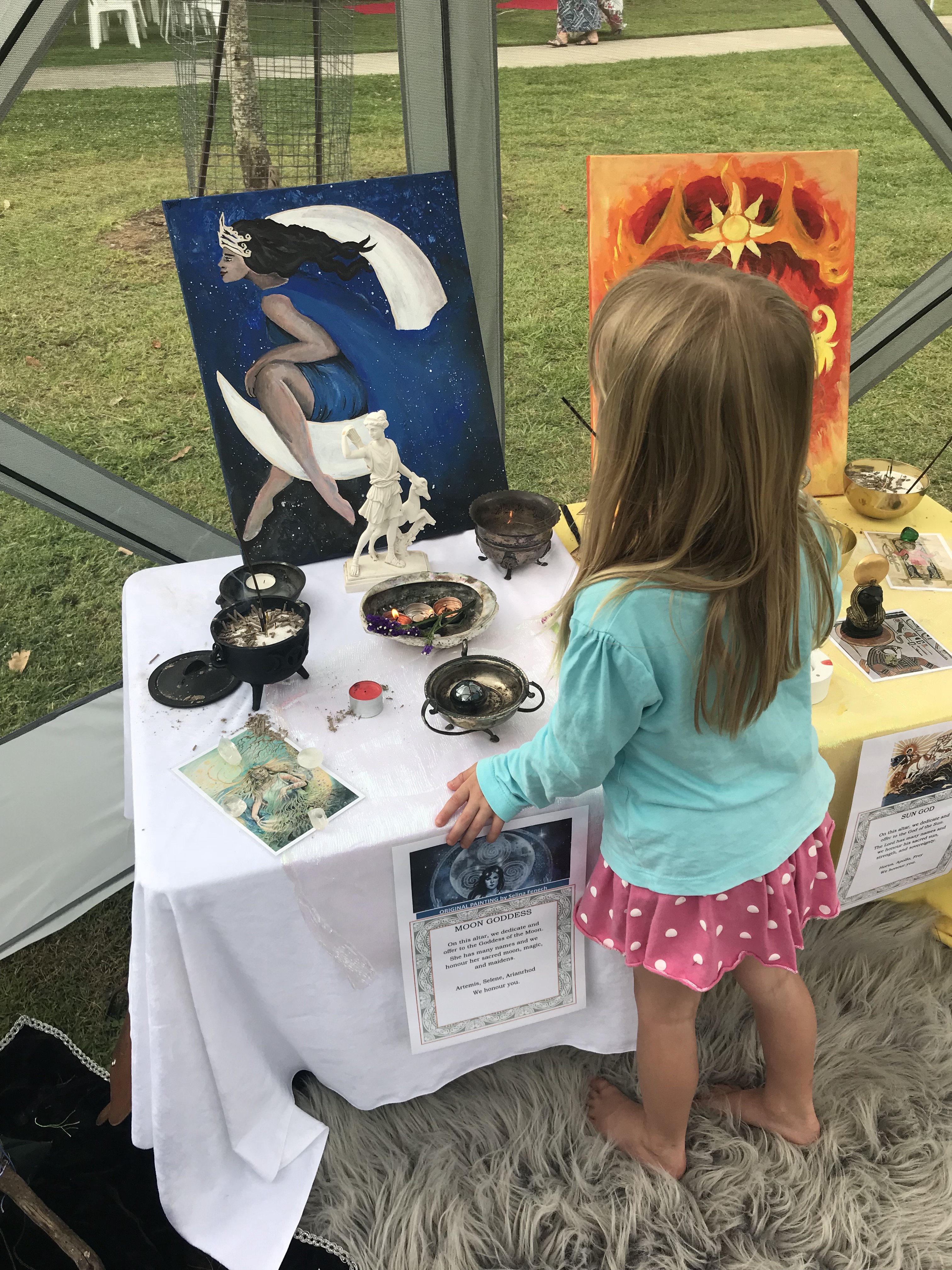 Our youngest Temple Attendant helping us keep the incense alight

The biggest surprise of the day was how unexpectedly loud Artemis was! She was our primary Moon Goddess image and she was a very strong presence. Almost everyone who came in went straight to her altar and she certainly got the most offerings! We are so looking forward to more pop-up Temple events to see if this was unique to this day or if she has a particular interest in our work. It’s the unexpected surprises of this work that are the most fun!!

Offerings to the Moon Goddess

Our dreams for the Temple seem stronger, clearer and closer today than they did a week ago. We met some amazing people yesterday and were thrilled by how positive a response our Temple received. Everyone who came by entered with an open heart, sharing of themselves to add to the potential and the birthing of the Temple. Their generosity of spirit is part of this dream and this great work now, helping us to build and grow. We are already planning some more pop-up Temples and are so looking forward to more days like this in the future.

At the end of the day, we closed the Temple and thanked our divine guests for being with us, then we released the energy of the day out into the world. May it bring greater magic, wildness and beauty to this world we live in.

The Temple of All Gods.

Published by Temple of All Gods

A Pagan Temple in Brisbane, Australia. View all posts by Temple of All Gods